Bugatti Type 35 is a Most Amazing Car


Bugatti’s Type 35 was a successful and most amazing racing car in the 1920s and 1930s. The eight-spoke alloy wheels are a distinctive and innovative – Bugatti characteristic.

Despite Bugatti’s opposition to superchargers, a Roots-type blower was added for the 128 bhp Type 35C. There was also a cheaper and less powerful Type 35A with plain bearings. Later the engine was stroked to 2.3 litres for the unsupercharged (and very rare) 35T and the supercharged 35B. The same chassis was also made available with 1.5 litre engines in the Type 37 and Type 39. 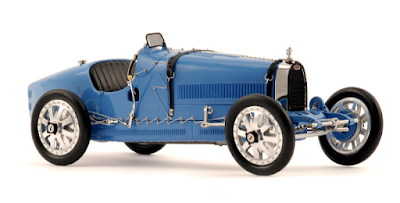 Bugatti’s Type 35 was an extraordinarily successful racing car, winning hundreds of events including five consecutive Targas Florio in Sicily and the inaugural Monaco Grand Prix in 1929. It must also rank as one of the prettiest cars of the pre-war era. It’s a combination which makes the Type 35 one of the most sought-after and most valuable of collectors cars.
Posted by Sujata Mehta at 1:04 AM